Family legend has it that my great-great-grandmother, Elizabeth Montet Giroir, came from a well-to-do family who lost everything with the conclusion of the Civil War. Certainly, they didn’t have any money after the war. The family lived very hand to mouth.

I wondered if the Montets really were prosperous and dug through old newspapers and succession records to find out. The succession records talk of a sugar house and property (this was after the Civil War so no slaves at that point). Newspaper accounts refer to an Aurelie Plantation in Assumption Parish that belonged to the Montets.

I’m pretty familiar with the swath of bayou road between Plattenville and Thibodaux. I travel it regularly to see family. The big plantation home in the area is Madewood, which belonged to the Pughs. I’d never heard of Aurelie.

At this point, I should point out – once again – that the mention of the word “plantation” in the family tree likely doesn’t mean that your family once lived at Tara. Plantation is another word for farm. Sorry.

But I went in search of Aurelie anyway. Elizabeth’s father came from a large family who lived near Plattenville. One of his brothers was Zephirin Montet. It was Zephirin who launched Aurelie, which he named for his wife.

Zephirin was actually Zephirin Rosemond Appolinaire Montet. He was a prosperous planter in Assumption Parish. His grandson Numa Montet was a U.S. congressman.

It appears that the extended Montet family called Aurelie home. The Assumption Pioneer – still in circulation to this day – recorded Zephirin’s sister-in-law Pauline Truxillo Montet dying at Aurelie in 1886.

I don’t know if Elizabeth grew up on Aurelie or if she grew up on a neighboring property. I remember my grandmother talking about the Montet home, but she never clarified if it was the Florentin Montet home, the Zephirin Montet home or the home of Florentin and Zephirin’s father.

What I suspect is that Aurelie originally was the property of Elizabeth’s grandfather (father to Zephirin and her own father, Joseph Florentin). It seems likely that the property got divvied up when the old man died, and Zephirin called his portion Aurelie for his wife. Perhaps Zephirin’s portion was a real money-maker – or maybe he added to it and expanded the acreage.

A similar arrangement happened after my husband’s grandfather died. Each child got a portion of the family farm. The entire farm still is in his descendants’ hands to this day, but it’s not really intact. Instead, it got sliced up into thirds for his three children. One of those thirds has been more profitable than the other two-thirds. It’s the luck of the draw.

From the succession records, it seems that the Montets shared a sugar house (where sugar was boiled into syrup). It appears that Zephirin and Florentin got shares in the sugar house when their father died. I’ll have to dig up Joseph Philippe Montet’s succession record, which most likely is in French, for clarity.

In 1912, Aurelie changed hands. The National Real Estate Journal described the sale as one of the biggest real estate deals of the month. The Montet Company Ltd. sold the plantation on Bayou Lafourche to Joseph Webre. At that time, the plantation included 600 acres, including 500 acres in cultivation, residences, cabins and a sugar house. The sale was speculated to be $50,000.

Other accounts name the buyer as John Webre, who died in 1915. It looks like Numa Montet bought the family property back temporarily and then sold it to an Edmond E. Webre.

I’m still in search for more on Aurelie. An old map of Assumption Parish probably would help.

More from my grandmother’s attic.

This comes from the “Houma Daily Courier” on Oct. 8, 1972. It’s an interesting look at small schools of yesteryear.

I’ll include the article at the very end. It’s long and not terribly interesting. It’s more fun to look at the pictures. 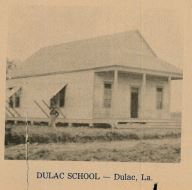 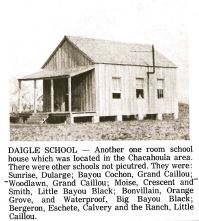 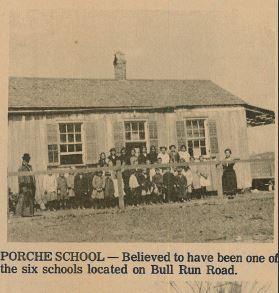 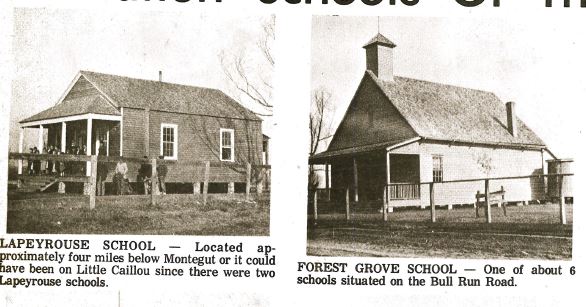 “Did you know .. that these pictures are some of the one room schools that dotted our parish landscape on the plantations about 75 to 100 years ago and produced some Terrebonnians to be proud of?

That Henry J. Ellender taught in one of these plantation cabins on Hope Farm Plantation until a larger building was built which served a dual purpose: school room in the day time and a dance hall on the weekends?

The young Henry J. had just finished his course of study at Soule Business College in New Orleans in 1902, when he started teaching at Hope Farm. He taught there 15 years. Then during the depression in the late 1920s, he taught again on lower Terrebonne. Dr. Henry T. Ellender – the dentist, boat builder and great fisherman – and his famous brother, Dr. Rudolphe Ellender – for whom the Eye Clinic was named – are some of this early teacher’s illustrious children of which there were eight or nine.

The late Senator Allen J. Ellender, a cousin to the above mentioned family, and his late brother Claude, the brilliant attorney, went to school to Professor Henry as did Nelo Hebert, who is still hale and hearty and one of Bourg’s most successful businessmen.

Mr. Nelo told of an earlier one room schoolhouse at Canal Belanger, now called Bourg, that was just across the street from where Stanley Boudreaux’s filling station is today. The little house has been remodeled and restored to the extent that one cannot recognize it as the former little schoolhouse. It is occupied by Mr. and Mrs. Collins today.

In those early days some of the teachers were Mrs. Willie Hebert; a Mrs. Hornsby; Mrs. Zie Glyn, who taught Nelo Hebert and others; and Miss Ella Trahan, who had come home to Houma from school in Mississippi after the death of her father in 1890, taught school at Canal Belanger (Bourg), then married Allen A. Sanders, a young sugar planter from Montegut. His father, James Monroe Sanders, had come from Canton, Mississippi, just before the Civil War.

Lotti, Mrs. John Gazzo, and Mae, Mrs. Randolph A. Bazet, were born of this union and raised on the beautiful shores of Bayou Terrebonne at Magenta Plantation.

Pointe-aux-Chien, a winding and small bayou just before one reaches Montegut, had for one of its first teachers another Ellender cousin, Thomas Ellender. Many other teachers followed; eventually so did a larger school.

At this time, Montegut had a three room, public school, private tutors and governesses. Then came John “Bud” Wallis, who taught at the Indian school at Point au-Barre’ from about 1900 to 1915, when a storm practically wiped out the Indian settlement. Mr. Wallis was a cousin of Mr. Claude “Skipper” Wallis, Terrebonne’s oldest living Republican.

We are not at the end of the one room schools on Bayou Terrebonne yet. At Madison Canal on the lower bayou, E. Clarence Wurzlow, father of E. C. Wurzlow Jr., taught school during the 1880s and in addition to becoming Clerk of the District Court was a recognized natural scientist, particularly as relates to botany, ornithology and entomology.

That Mr. and Mrs. Emile J. Naquin had a beautiful young daughter, Leah Naquin, who taught in one of the most famous of these one room schoolhouses (I think it was called Babin School). It was on a dusty road between Ellendale and Bull Run Plantations on Bayou Black. She later married Felix J. Hebert, and they became the parents of none other than our much loved and admired U.S. Congressman F. Edward Hebert.

You know Miss Maude LeBlanc rode up to Bayou Cane with the mailman every morning, then walked home in the afternoon. She also has many school stories to tell of the one room schoolhouses. This year Miss Maude received the most coveted award of “Louisiana’s Teacher of the Year” for she taught for many years all over the parish.

In the following paragraphs are listed a few names I gathered from the Chacahoula area. Miss Marie Daigle and Mrs. Henry Bernard were teachers at the Cedar Grove School.

The name of Miss Kattie Quinian seems linked with the Maduse School where Kader and Ringold Cocke, Emile Daigle and Freddie Louviere went to school. It was in the cane fields, just across the road from the Ringold W. Cocke plantation home.

Miss Marie Lajaunie and Miss Marie LeBlanc also were connected with the Daigle School. Miss Aline Lirette and Mrs. Ezelle Wallace Dillard taught either on the railroad or on Schriever Route.

Miss Georgia Connely took the train in Houma every morning from 1908-1920 to Central which was about halfway up the railroad between Houma and Schriever. Later she was transferred to Ashland Plantation’s “one room,” but commuted every day at an easier pace because Mr. Jean Caillouett, the plantation owner, gave her a car for her own transportation.

Did you know? She taught the Buquet boys among many others. The president of the Chamber of Commerce, Mr. A. J. Buquet Jr., has fond memories of Miss Georgia as his teacher.

That Miss Margerite Moody, today known as Mrs. Jules Daigle, taught at Sunrise in 1912. She then went on to Ashland for one year in 1913, when E. T. Brady Sr. attended that school. It is noted that Brady’s favorite pastime was climbing the flag pole. Miss Moody returned then to Chacahoula in 1914, and she then married Jules Daigle.

That Miss Ada Munson started teaching by riding a bicycle to the Residence Plantation, south of Houma every morning. Later she rode the train daily to the Bertilot one roomer near Ardoyne Plantation. It is noted that she changed schools several times: Dug Road, LaCache, where she had to board in, then her last years in Ashland.

Miss Lolita Theriot, a pretty little teacher, came onto the scene at Ashland at this time. She later married Leon Gary and became “Houma’s First Lady” during her husband’s administration of 1948 to 1962.

Way across the cane fields of Ashland, the Rauch Plantation on Little Caillou had a schoolmaster named Mr. Elfert, and the school was named the Elfert School. Boys from miles around rode their ponies to the school. Some names to remember were the Maginess boys, the Connely boys, the Edmund boy who later became a surgeon, the Gaynar boys, and so on and son on.

Way back were the days when Miss Mable Kelly got up early in the mornings and hitched up her buggy to go to the country school near Houma. Her brother, Irvin Kelly, taught at Chacahoula and then at Little Caillou, where boarding in for three weeks at a time was common practice. Miss Lillian Atkins was another teacher of this time.

That Willow Wood School on Upper Coteau had Miss Mildred Pontiff as its teacher for 21 years. For years she rode the New Orleans bus as far as the Coteau Road, and then walked the last mile to the one room schoolhouse. Later the school furnished transportation means of school buses.

When asked who were some of the children she could be most proud of, her answer was Father Jules Robichaux, who was ordained in Houma only a few years ago, Miss Valerie Duplantis, Mrs. Emile Charpentier, Miss Inez Lirette. Mrs. Johnny Stevens also went to the Upper Coteau School.

That another pretty young schoolteacher from Mississippi came to Terrebonne and later became Mrs. Stanwood Duval. She was Mamie Richardson, and she taught at Rebecca. State Senator Claude Duval and Catherine – Mrs. Harold Dean – are her Terrebonne children.

Did you know that Dr. C. F. Breaux, father of Henry Breaux (present superintendent of the Terrebonne Parish School Board), was born on Mandalay Plantation on Bayou Black. In his childhood he attended a one room plantation school known as Bonvillain School on Bonvillain Plantation. His teachers were Miss Cecilia Bonvillain and Miss Emma Bourgeois.

This little school building, which was built before the Civil War, still stands today.