St. James: The triple execution of John Williams, Alfred Decaraux and Noel, alias Madison Hampton, convicted of the murder of Francis S. Menteath, on the night of the 10th of May last, took place today, and was witnessed by over one thousand persons, both men and women.

As your readers may not be familiar with the particulars, I will give a
short account of the fiendish deed and the subsequent trial and conviction of
the perpetrators.
On the night aforementioned, four men–James Parker, John Williams, Alfred Decaranx and Noel-started from the vicinity of Judge Beauvais‘ residence with the intention of committing a robbery. It seems that after trudging a distance of about ten miles up the river, as far as the St. Michael’s Church, and not having come to any determination as to which store they should rob, they halted and held a consultation which ended in the selection of Choppin’s store, situated upon the batture fronting the Welham place.
Arrived at this store, John Williams made an attempt to wrench the back door open, which was at first unsuccessful, but he immediately made a second trial, and being a powerful man, succeeded in wrenching the door entirely from its fastenings.
Parker immediately rushed in and seized young Menteath by the throat, holding him thus until John Williams produced a rope and adjusted it securely around the neck of the victim, when each of the villians took an end of the rope and pulled it until Menteath was strangled to death.
The arms and legs of the young man were then tied, and John Williams took the body upon his back and threw it into the river. The store was then pillaged and the fiends started away, but had proceeded but a short distance when Williams proposed to return and burn the store in order to destroy all vestige of their crime. Acting upon the suggestion of their leader, they returned and set fire to the store which burned to the
ground.
AT THE TRIAL
The foregoing facts were elicited from Parker, who was accepted as State’s evidence, and gave his testimony in a remarkably clear and straightforward manner. Williams attempted to prove an alibi by his wife, but she stated that he was not at home the night of the murder, There was no rebutting testimony; Parker’s statement being corroborated by other witnesses, and also by the confessions of Decaraux and Noel, consequently the three men John Williams, Alfred Decaraux and Noel, alias Madison Hampton, were found guilty of murder in the first degree and sentenced to death.

Some time after the trial the Governor signed a death warrant. Alfred Decaraux and Noel were visited by their mothers, who bade them a last farewell. Noel’s mother reproached him with deserting the Catholic religion-in which faith he had been born and
raised–and joining the Baptist sect. She told him that this change of religious views had cost him his life, as they were Baptists who had induced him to become a party to the crime for which lie was to pay the penalty with his life. Williams was visited
by his wife. with whom he had been on very bad terms. He forgave her for having testified against him at the trial, and expressed the hope that she had forgiven him for his great crime.
At sunrise, this morning, the prisoners were baptized by the Rev. Samuel Cook. The unfortunate men remarked that, last night was the longest they had experienced during their confinement, and expressed a desire for the our of execution to arrive.
A few minutes before nine o’clock, everything being in readiness, a wagon containing three coffins drove up to the jail door to receive the prisoners.
Decaraux was the first to make his appearance. He came down the stairs looking pale and haggard; he mounted slowly into the wagon, and took his seat upon the coffin which
bore his name, gazing around at the assembled crowd, expectantly, then dropping his head upon his breast and swinging himself to and fro.

Noel came out next with buoyant step, and sprang lightly into the wagon, seating himself near Decaraux, and nodded to some friends in the crowd.

John Williams was the last of the condemned men to come forth from the jail. His step was slow and faltering, and he was evidently weak and depressed by mental suffering. He shook hands with several friends, then jumped into the wagon with the others. Parker, the accomplice to the deed who had turned State’s evidence and saved his own neck, mounted the driver’s seat and took the reins.
Randall Coleman, a prisoner who was under charge of murdering a man, was brought forth securely bound, and placed in the cart with the condemned murderers, he having expressed a desire to witness the execution.
THE START
At nine o’clock the Sheriff gave orders for the start, when a numerous
guard immediately formed around the prisoners, and proceeded towards the place of execution. The wagon containing the condemned was followed by the executioner in a buggy covered with the colors of death-white and black. The scene was a solemn one.
Three men condemned to die, dressed in white, with white caps on their heads, and the executioner following behind their wake.
AT THE PLACE OF EXECUTION.
The place where the murder was committed being too small for the execution, a spot, one mile above, on the batture in front of the upper portion of the Welham plantation, was selected. A circle was formed with a rope, in the centre of which was the gallows. Guards were stationed around this circle and none of the spectators were admitted within it. The prisoners were now ordered to descend from the wagon.

Decaraux came first and mounted to the platform of the gallows, seating himself upon the right. Williams and Noel followed; the former taking-the middle seat, the latter the one upon the left. The Sheriff then notified the condemned that if they wished to say anything, now was the last opportunity that could be given them.

Decaraux was the first to speak. He said:

“Here I am before you, and you know what brought me here. I am glad my time has come, I shall soon be with my Heavenly Father.” On the rope being adjusted around his neck he exclaimed ” Good-bye, old world, good-bye.”

Williams then arose and commenced singing a psalm. He essayed several times to speak, but got no further than “Don’t be alarmed, my friends,” then broke down.

Noel spoke last, in a cool and indifferent manner: “You see we are before you; you know what brought us here. Let it be a warning to you all not to follow in our tracks.”

The time allotted them for speaking having expired, the executioner was summoned. Mounting the scaffold he pulled the caps over the faces of all three of the men,. and adjusted the ropes around their necks, and bound their hands atop feet. The Sheriff ordered the executioner to do his duty. Like a thunder clap the three criminals were suspended in mid-air.

Noel was killed immediately. Decarax showed signs of suffering, raised himself convulsively, then fell with a lurch. Williams also showed some signs of pain, but they were not as perceptible as Decaranuxs.

At five minutes to twelve the bodies were cut down, after having hung fifty-five minutes. When the rope holding Williams was cut, the body fell with great velocity and rebounded from the earth like an elastic ball.

Deputy Coroner Gray empaneled a jury, and held an examination upon the bodies, declaring them lifeless. Williams was buried three yards from the gallows; while the mortal remains of Decaraux and Noel were delivered to their friends for interment elsewhere.

And thus ended a scene which will be remembered for a long time to come in this community.

A very large number of people witnessed the execution, and were visibly affected.

One of my ancestor’s homes now sits not far from where I live in Baton Rouge. It is believed to be one of the oldest surviving Acadian homes in Louisiana. 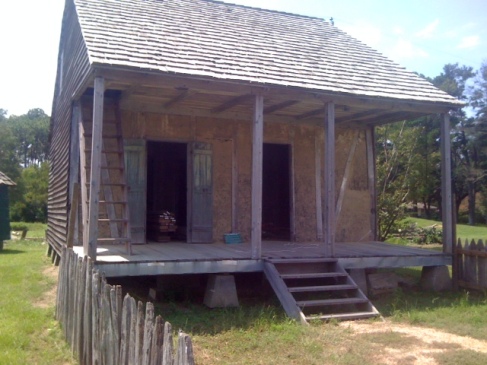 Jean Charles Germain Bergeron and his wife, Marie Madeleine Doiron, had 11 children. Their son, Jean Baptiste, is my direct ancestor. This house has a large front room and two small rooms at the back. The ladder leads to a loft.

The home is at the LSU Rural Life Museum – which is a really cool place to visit if you have a free morning or afternoon. Lots of old houses set up to resemble a little town.

A plaque explains the Bergeron house’s history. The house used to sit on the banks of Bayou Lafourche near Labadieville in Assumption Parish.