I decided the other day to see what I could find out about my ancestor John S. Hebert (Jean Severin Hebert before he Americanized it) and his military service. I should add that I have little interest in wars and military history. My eyes kind of glaze over. So my challenge was to turn this into enough of a narrative to interest even me.

There were 297 Heberts from Louisiana who fought in the Civil War. This is not surprising. In Louisiana, Hebert is like the surname Smith.

Of those 297, 296 fought for the Confederacy and one fought for the Union. I don’t know who Hillaire Hebert was, but he was the lone Hebert to pick the winning side.

And there’s my ancestor.  He was in the 26th Regiment of the Louisiana Infantry. Their big battles were Chickasaw Bayou and Vicksburg.

I started with his pension application that John S. Hebert submitted in 1907. At the time, he would have been 69. He listed 10 children (6 boys and 4 girls). Let’s see if he got that right.

Two of the Hebert children died young (Malvina and Mary Josephine) so he did have 10 living children in 1907. The girls: Marie Arcene, Rose, Eve, Rosalie and the twins Cleona and Leona. The boys: Alexis, Jules, Seraphin and Adam. He did get it right!

And here’s his recollection of his unit:

That means he was 24 when he went off to war. A little over a year later, he was captured and promised never to take up arms against the United States again.

John S. Hebert seemed a little confused about a question on the pension application inquiring whether he took the oath of allegiance to the United States during the war. He wrote “yes,” then “no.” Then he drew a line through both responses.

I don’t know if he got his pension, but I was interested to read more about his war prisoner details. The family story – as far as I remember my grandmother telling it – was that he was captured, put in prison and then walked home after the war ended.

According to John S. Hebert himself, he was taken at Vicksburg, paroled in St. Martin Parish and exchanged at Red River Landing. At least I think that’s what he wrote. His handwriting wasn’t the best.

So I went in search of other records, starting with learning more about Company B. 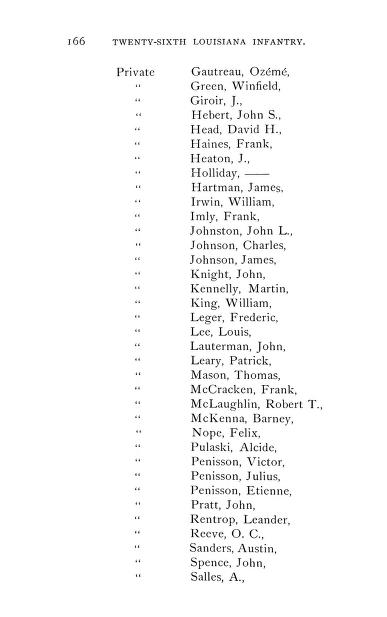 Look! There he is on the roster. John S. Hebert later married a girl named Rosalie Penisson. The Penissons who served with him in Company B would become his brothers-in-law. Alcide Polaski’s sister, Elodie, married John S. Hebert’s brother, Gedeon. Gedeon, by the way, was four years younger than John S. but he was further up in the ranks than his big brother. Gedeon was a first corporal in Company B while John S. was just a private.

I'm a Louisiana girl who's lived all over our beautiful state. My grandmother got me hooked on genealogy. Since she'd taken care of my father's side of the family tree, I tackled my mother's side. My mother's family came to Louisiana via France via Acadia. View all posts by louisianagenealogygirl